As the US find itself in the grip of heightened racial tensions, former Illinois Republican Congressman Joe Walsh took to Twitter to tell President Obama the chaos unfolding in Dallas is “now a war.”

The retired Walsh, who used to represent the 8th District of Illinois, went online to bash both Obama and the #BlackLivesMatter movement in no fewer than a dozen tweets. This one below was later deleted, according to the Washington Examiner. 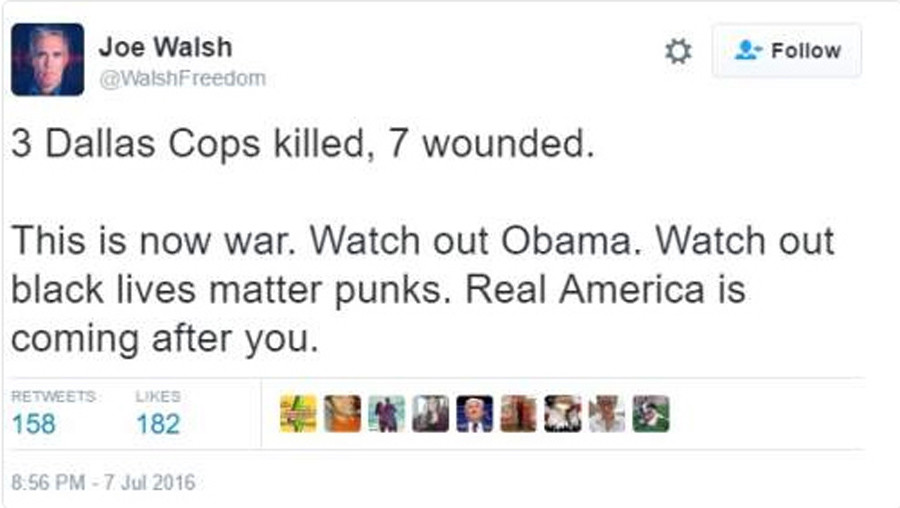 Another tweet sees Walsh strike out at the now widespread accusations of white racism.

Walsh also posted a series of tweets about “standing up” to “cop haters”, such as this one.

It’s time 4 patriotic Americans to stand up & stand against all the Cop haters – from Obama to the thugs on the street.

His latest Twitter address says the police “work their asses off to protect our inner cities. They deserve respect and help. Not hate and resistance.”

The retired congressman is now a conservative radio talk show host. However, Walsh has been dropped from a number of radio shows for various reasons.

3 replies on “Former Congressman Wants to Bring ‘War’ to Obama”

Hallelujah, finally a brave and truthful soul speaks the message that needs to be heard! I’m with him 110%! These black bastards need to understand that they are in a very small minority and if they want to keep instigating violence then suffer the consequences! Here is how I see what is going down in order to take the country down:
Here we go again, and again, and again, another false flag timed conveniently as the Muslim-Marxist was out of the country and right after the disgraceful mockery of the laws of justice experienced with the ole ugly commie whore “Hillary the Pillory’s” get out of jail free card pass! This communist NWO regime has total control of every facet of government as they cleverly dismantle America! One shooter, two shooters, three shooters, four shooters – they don’t know, they say, but they do know because this Godless, Satan worshipping regime has their dirty hands all over this one just as the previous ones – Orlando; Boston Bomber, San Bernardino – and the future ones! This was a well thought out and planned operation and not some spontaneous, last second spur of the moment get even massacre! The sheeple just can’t or don’t want to believe that we have EVIL, POWER hungry demons at the top of our government but in the end when it is too late they will of wished that they had paid attention and took action instead of keeping their heads up their asses! REVOLUTION will be the SOLUTION – guaranteed; that is why these false flag operations will escalate in order for these Godless ghouls to brainwash and bully the sheeple into gun control, the last nail in the coffin of the “TRANSFORMED * TRANSGENDERED” AMERIKA! States should start manning militias in order to send a message to “Moscow West” as they prepare with war against Russia which has already begun

It is about time some people go after the #1 troublemaker that is setting in the WH. and please don’t forget the NWO and the Agenda 21, crap that they are pushing. Lets them put all the cards on the table and see what pops up. And now it is the Fed police that they want to push on us. We all know what is in that damn disgusting Agenda 21 issue. They want all of us to surrender our RIGHTS TO THERE DISGUSTING PROGRAM. They have been trying to inch ourselves to their way for a number of years so that we don’t notice. They are a bunch of cunning devils people don’t fall for it. Just like they are using Weather wars on the west coast so we don’t the food that would have been grown for us to buy. Remember that saying about the elites If you control the food you can control the people. This is what they are doing to us people. Shoot it loud and clear. These are evil men out for their own power.!!!!!

Too bad Walsh is a “former congreeman”. These are the people that we need in congress to change the mindset in that awful and corrupt branch. They do nothing but talk and betray. 95% of congress should be removed for dereliction of duty and failure to uphold the oath they took.