A police cruiser in Florida was set on fire and a note referencing the Black Lives Matter movement was found nearby. 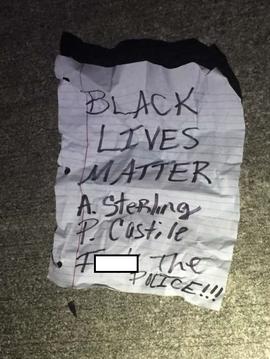 According to a statement from Daytona Beach Police, dispatch received a call of a vehicle fire at 2:30 a.m. Sunday. Responding officers found a marked Daytona Beach police car fully engulfed in flames in front of the Islamic Center of Daytona Beach.

The car was being used as a “ghost car” to deter crime in the area.

Fire crews responded and put the fire out. No one was injured.

Investigators found a note that said “Black Lives Matter. A. Sterling P. Castile,” and referred to police using an expletive. It’s unclear exactly where the note was found.

Those deaths were followed by two deadly ambushes targeting police officers. Five officers died when a gunman opened fire during a protest in Dallas on July 7. And on Sunday, a gunman shot and killed three law enforcement officers in Baton Rouge.

It seems like black lives matter has turned out to be just another gang of thugs. They should be put on the terrorist list. Anytime you start destroying public property you are a criminal and should be thrown in prison for the maxium time allowed by law. It is stupid to think you have a right to destroy some else’s property and have no responsibility for your actions.

BLM IS A TERRORIST ORGANIZATION .

Why is it that a white cop shoots a black, it’s riot time for all that wants to participate?
When a black shoots a white cop no riots and little is said.
What happened to equal rights?
Have to get our children in Washington working on that.

I agree completely with what you said, but don’t you get it yet look to President Obama and his pal Al Sharpton, and then on to the woman who is running for President, and you
might find your answer.

BLM, not anymore when they resort to terrorism in our streets and cause irrepairable damage to anything the the taxpayers have bought, such as cop cars. This is what went on in WATTS during the riots there. The Terriorists chose to vandalize their own communities and steal from the store owners the merchandise, and burn down their own town..When are people going to learn that this is not the way to get Justice, but makes people to put them in a pile with all Terroirists.

I agree with you SSgt. And in Chicago they have about 1,000 murders a year and it is mostly Black on Black. I believe that All Lives Matter. How about you.

Cop killed in Kansas. And what are he moochers worried about ?? 40 seocnds of Melania’s excellent speech!